A blue line was painted on the floor to link all the buildings used as venues at the Autism and the Arts Festival. The organiser, the heroic academic Shaun May had hoped for something more like this: 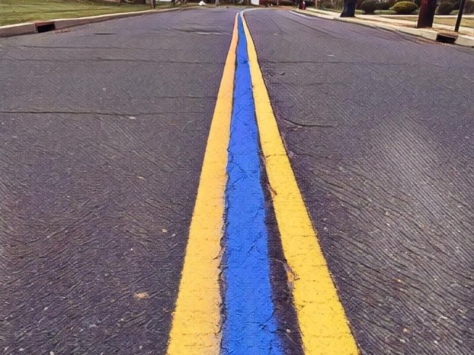 but it ended up more like this (though with more waves, diversions, paint splashes and corrections). I wish I had photographed it. But I was so busy. Doing events or interviews for a podcast made by me and Joanne Limburg about autism and literature that I think might just be the best thing I’ve ever helped make happen, or chatting to people. Or relaxing by walking through bluebells, or eating.

Not Actual Blue Line Either

I still seem to have some brain left. Which is surprising after three days. So, whilst thoughts are still fresh, here are some things I learned/thought/found out as a participant, chatter and audience member:

1. Autistic joy is a key component of autistic creativity. It’s a glint, a shine, a glow, an intensity. It powers writing, pictures, music, novels, not to mention inventions, discoveries, analysis…

2. There’s lots of it about. Many of your favourite things exist because of an autistic person following what makes them glow.

3. Autistic creativity is full of folds, bends, diversions. It makes unexpected connections and gleefully crosses boundaries, genres and conventions. It can be completist. It can see the whole of things as a shape and insert interchangeable parts.

4. It’s nice to see it without it being framed by doctors, psychologists and psychiatrists talking utter bollocks about it or the people producing it.

5. Autistic voices are getting louder and more public. I don’t think there’d have been a strong demand to turn a gig with loud clapping into into one with silent clapping even two years ago for example. (It happened at the gig I was doing with Robert White for example. I was glad).

6. Autistic people seem to vibrate and hum at a higher, faster frequency than non autistic people and are sensitive to this. (See also moves between slow & fast). That means there are more very calm and very frenetic patches of energy throughout autistic space. It can be contagious. Some people are calm-seekers, some are frenetic-seekers, some oscillate. (I’m a big oscillator with a veer to calm). There was enough space for everything to coexist.

7. Many autistic people said they felt much more relaxed in social gatherings than they normally would (I did).

8. There are so many hidden histories yet to uncover about autism. The whole “Mothers being dubbed mentally ill because they were trying to get help for their daughters” thread is terrifying. Co-occurring physical conditions like POTS & EDS are still under-recognised.

9. Dislocations-physical, mental, emotional, spatial are likely to be a feature for autistic people. These dislocations occur on other axes too. Sometimes obscuring, sometimes clarifying. No one is “just” autistic. They are from a place, a time, a class, an ethnicity, a gender. They share dislocations with others who are dis-located-which may allow the forming of bonds, or may lead to double, treble, quadruple dislocations…

10. These burgeoning, fragile, necessary autistic spaces may be the foundations that can help explorations to, and with, allies, companions, partnerships. However power imbalances within and outside these spaces must be acknowledged and respected. Being able to be there was a privilege not available to all. (That shouldn’t be taken to mean that the path to being there wasn’t differently hard for so many of us). It is always better to be done “with” than “to”. Luckily autistic people (can have) strengths in clear, direct, honest communication. What could be more useful (& endangered) in a post-truth world?

One thought on “Autism and the Arts Festival (University of Kent): 10 Things I Learned”

NOT the social anthropologist. Though confusingly I did an ethnographic PhD.